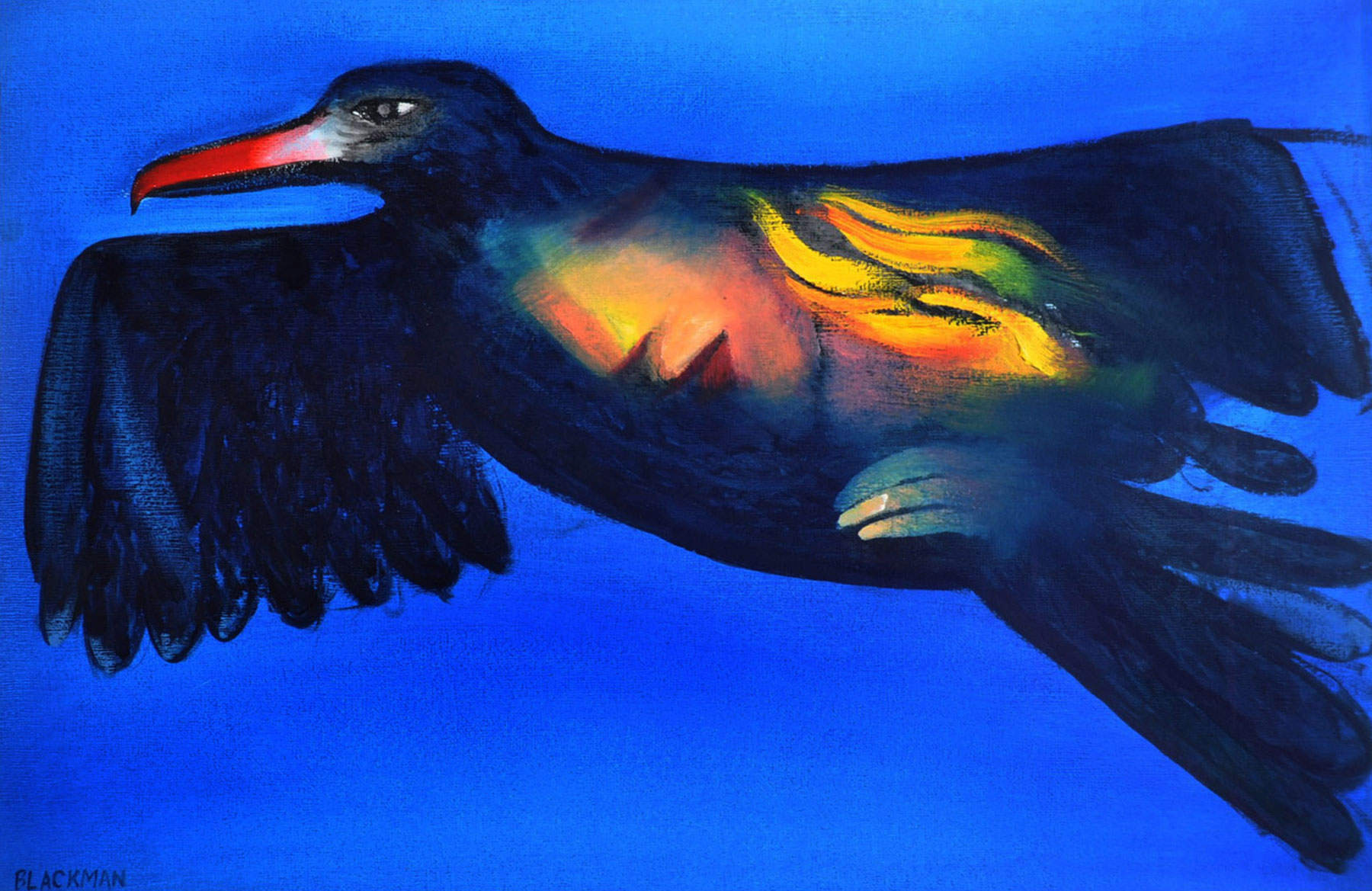 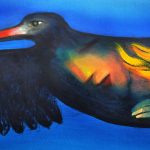 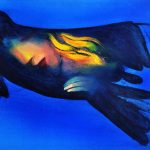 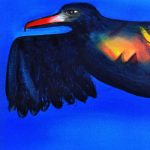 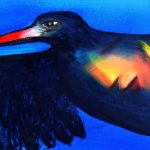 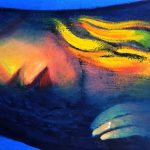 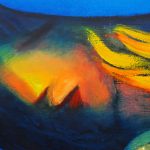 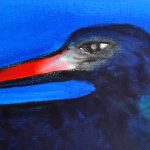 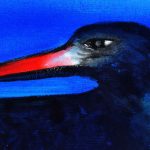 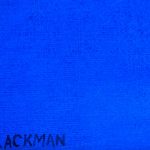 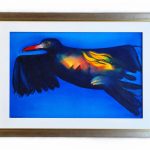 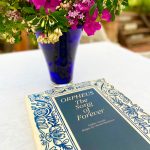 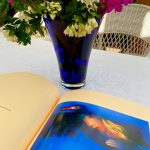 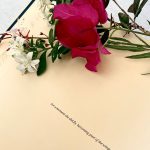 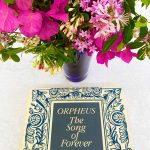 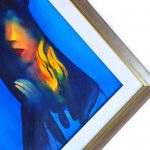 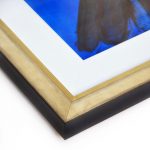 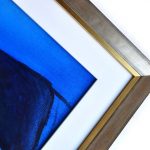 This beautiful work by Charles Blackman was created to illustrate the lyrical book of poetry “Orpheus the Song of Forever” by Nadine Amadio.  This stunning painting is illustrated on page 58 of this rare and very fine limited edition book.  Works from this “Orpheus” Series are very collectable and rarely surface for sale.

In the 1980’s Charles Blackman completed his “Orpheus Series” a romantic body of works that were inspired by the Greek myth of Orpheus.

This series was lyrical, inventive and richly colourful. Much of the Orpheus Series was done on the Sunshine Coast at Buderim where Blackman lived in the early to mid 1980’s. Works from this series were exhibited in 1983 in Brisbane, Sydney, Melbourne and Canberra.

In the series, the  dominant image is of Orpheus, the Singer, evoked in images that are intensely poetic and revolving around the theme of love and music. They are inspired by the Greek mythological figure of Orpheus, a minstrel with a golden lyre who played and sang with bewitching sweetness.

Greek Mythology is rich in stories related to music, with Orpheus being one of the most well-known figures. Mythology tells us that Orpheus was the son of the Thracian King Oeagrus, and his wife Calliope, who was one of the nine Muses. Apollo presented Orpheus with a golden lyre and the Muses taught him to play so well, that he not only enchanted wild beasts, but also made trees and rocks move from their places to follow the sound of his music and poetic songs.

After a visit to Egypt, Orpheus joined Jason and the Argonauts on their quest to find the Golden Fleece.  He sailed with them to Colchis, his music playing to the rowers to keep time for the rowers and helping them to overcome many difficulties.

Orpheus eventually won the heart of fair Eurydice,  but their happiness was cut short.  As she danced at their bridal feast, a venomous snake, gliding through the glass, stung her heel and Eurydice died on her wedding night.

The lamenting husband Orpheus bore Eurydice to her grave, playing mournful songs that moved the hearts of all who followed her funeral train.  So devoted to Eurydice was Orpheus that he descended to the Underworld of Hades to reclaim her.

Stirred by the expression of his grief in the exquisite music that he played, the gods consented to restore Eurydice to the living world on the condition that Orpheus refrained from looking back at her until he had emerged from Hades. At the very end of the tunnel he forgot his promise and glanced back at Eurydice whereupon she was transformed into a wisp of mist and vanished forever. Orpheus was inconsolable and separated himself from human company.

There are many accounts of how Orpheus died. One says that Zeus killed him with a thunderbolt for divulging divine secrets. Another tale tells of how he incurred the wrath of Thracian women who tore him to pieces in their frustration and lust.  His severed head fell into the river Hebrus and was washed out to sea, still chanting the name of Eurydice, and his lyre was placed in the heavens as a constellation. Legend tells that the Muses tearfully gathered his remains and buried them at the foot of Mount Olympus, where the nightingales now sing sweeter than anywhere else in the world.

The bitter sweet tale of Orpheus has inspired artists for centuries, including Blackman. His Orpheus paintings depict the creative flight of a soul that’s been freed. They express the thought that the creative force works externally in the works and that Orpheus’s songs grow in a garden that will flower forever.

Blackman’s works portray emotions and dreams, with great tenderness and power, a trait that is widely regarded as Charles Blackman’s creative and expressive forte amongst other Australian artists.

Connected to Blackman’s “Orpheus Series”, were a beautiful collection of works that he completed in the early 1980’s as part of a creative collaboration with author Nadine Amadio (1929-2009).  These glowing, colourful works were used to illustrate Nadine Amadio’s beautiful book of poetry, “Orpheus: The Song of Forever”.  Amadio’s text is a modern fairytale, recounting a passionate love story that lives beyond the boundary of time and space. The lovers in the story are a symbol of the poetic power of imagination.

Amadio was a central figure in Blackman’s life – she was a lifelong friend, muse, and biographer, and they collaborated on a number of creative projects together.  “Orpheus: The Song of Forever” is regarded as one of the finest Blackman-illustrated publications. The books are all individually numbered, and hand signed by both Charles Blackman and Nadine Amadio. Each book also contains a loosely inserted original signed and numbered lithograph “The Lyre” by Charles Blackman.  When the “Orpheus” book was released it sold out almost immediately, and they are now coveted as desirable collector’s pieces.

Published in 1983 by Craftsman’s Press, as a limited edition large quarto of only 250 copies, with a gorgeous cloth cover, designed by Charles Blackman, the book contains 128 thick pages with 32  tipped-in colour plate illustrations of rich and hauntingly vibrant drawings by Charles Blackman – regarded by some as amongst his best.

Amongst the illustrations in the book, is this hauntingly beautiful and mystical work “For a Moment She Did Fly, Becoming Part of the Wings and the Wind …”  which is illustrated on page 83. The original Blackman works that were created to illustrate the poetry in the book are very collectable and very rarely surface for sale on the open art market.

In November 1983, in response to an exhibition of the Orpheus paintings shown in Canberra in late 1983, “Canberra Times” reviewer and art critic, Sasha Grishin wrote: “The expression of sentiment is a key to the art of Charles Blackman.  The ability to sway the beholder through waves of feeling expressed with a naive openness is one of the most precious qualities in his art … the book itself is a lovely fairy tale about a Contemporary Orpheus, which stresses the theme of the eternal continuity of the creative spirit. … These are attractive, glowing paintings with a strong atmosphere of fantasy and suspense, and steeped in the Chagallian heritage.” 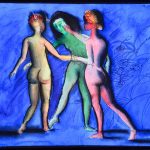 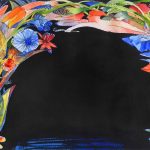 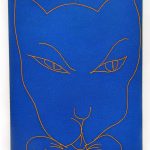 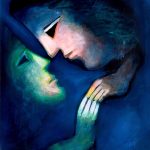 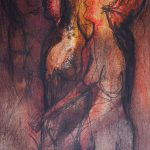 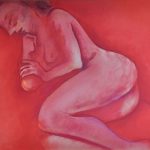 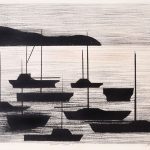 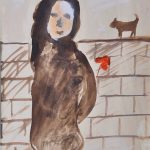 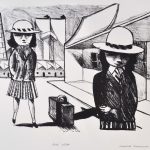